Series 1 of the iTunes Best of 2015 podcast Wooden Overcoats on USB Tape.

On the overlooked Channel Island of Piffling, obstinate undertaker Rudyard Funn runs his family’s failing funeral parlour. But when new and sexy undertaker Eric Chapman sets up shop across the square and becomes an immediate sensation, Rudyard realises he’ll have to take drastic steps to stay in business.

The USB Tape also includes for the first time – the Wooden Overcoats live recording Switcheroo – a very special rendition of episodes 1 and 2, not available on the podcast feed. The USB Tape comes with MP3 copies of each file along with high-quality FLAC and M4A files.

On the overlooked Channel Island of Piffling, obstinate undertaker Rudyard Funn runs his family’s failing funeral parlour. But when new and sexy undertaker Eric Chapman sets up shop across the square and becomes an immediate sensation, Rudyard realises he’ll have to take drastic steps to stay in business.

Adam Buxton’s podcast is sharp and the eight episodes of Wooden Overcoats are inspired comedy.

As good, if not better, than any Radio 4 comedy offering. It’s about rival funeral directors and it’s fab.

There’s intrigue, romance, violence, mystery – and it’s all done in the style of snap-pace comedy. There are shades of Fawlty Towers, The Black Adder, The Office, and likely a good number of other Brit-coms I’m not familiar with, all while being completely original.

Mark my words; this release of this funny, clever, independently produced sitcom marks a quietly significant moment in British radio comedy, when the BBC networks stopped being the only conduit by which top-rank young writers and actors got their wares to market. It’s not that podcast sitcoms haven’t been made before; it’s that this one is, for the first time, as good as anything you’d hear on Radio 4. Created by a 27-year-old writer called David K Barnes, it’s set on the small (and, I should point out, fictional) Channel Island of Piffling, and centres upon Rudyard Funn (Felix Trench), the stiff-necked director of the island’s only funeral home – who’s seriously put out by the arrival of a dashing, instantly popular new undertaker called Eric (Tom Crowley). Highly recommended.

There are no reviews yet.

Be the first to review “Wooden Overcoats” Cancel reply 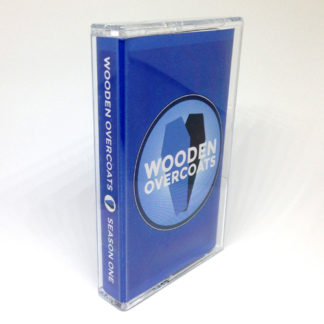 Due to Covid-19 we are only able to post orders occasionally; however you can still order from us. You will receive digital downloads of the content you purchase right away; we ship orders about three times a week. If you have any questions get in touch by emailing hello@audiobooksontape.com

Due to UK government incompetence orders to EU countries from 1 Jan 2021 may be delayed. This is outside of our control but we will do everything we can to make sure you get your order as quickly as possible given the idiots we have in charge. Dismiss